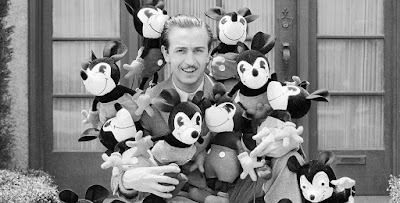 
Disneyland is often called a magic kingdom because it combines fantasy and history, adventure and learning, together with every variety of recreation and fun designed to appeal to everyone.

A dream is a wish your heart makes, when you’re fast asleep.

Disneyland would be a world of Americans, past and present, seen through the eyes of my imagination–a place of warmth and nostalgia, of illusion and color and delight.

Disneyland is a work of love…Drawing up plans and dreaming of what I could do, everything. It was just something I kind of kept playing around with.

all of our inventions for mass communication, pictures still speak the most universally understood language.

“Love is a song that never ends.”

When you’re curious, you find lots of interesting things to do.

“No matter how your heart is grieving, if you keep on believing, the dream that you wish will come true.”

“Everything is different now that I see you.”

“People always do crazy things when they’re in love.”

“I’d rather die tomorrow than live a hundred years without knowing you.”

“You were my new dream.”

“I was hiding under your porch because I love you.”

“Can you feel the love tonight? You needn’t look too far. Stealing through the night’s uncertainties, love is where they are.” – The Lion King

If you can dream it, you can do it. Always remember that this whole thing was started with a dream and a mouse.

“Can you feel the love tonight? You needn’t look too far. Stealing through the night’s uncertainties, love is where they are.”

“So this is love. So this is what makes life divine.”

“Listen with your heart. You will understand.”

It has that thing – the imagination, and the feeling of happy excitement- I knew when I was a kid.

Quotes on Success by Walt Disney
Give the public everything you can give them, keep the place as clean as you can keep it, keep it friendly.

Laughter is timeless. Imagination has no age. And dreams are forever.

Walt Disney Quotes About Disneyland
Disneyland is a show.

I think what I want Disneyland to be most of all is a happy place.

Walt Disney Quotes on Failure
I think it’s important to have a good hard failure when you’re young. I learned a lot out of that. Because it makes you kind of aware of what can happen to you. Because of it I’ve never had any fear in my whole life when we’ve been near collapse and all of that. I’ve never been afraid. I’ve never had the feeling I couldn’t walk out and get a job doing something.

Walt Disney Quotes on Mickey Mouse
“Mickey Mouse popped out of my mind onto a drawing pad 20 years ago on a train ride from Manhattan to Hollywood at a time when business fortunes of my brother Roy and myself were at lowest ebb and disaster seemed right around the corner.”

“I love Mickey Mouse more than any woman I have ever known.”

Walt Disney Quotes Keep Moving Forward
I do not like to repeat successes; I like to go on to other things.

I always like to look on the optimistic side of life.

Walt Disney Quotes on Animation
Animation can explain whatever the mind of man can conceive. This facility makes it the most versatile and explicit means of communication yet devised for quick mass appreciation.

Animation offers a medium of storytelling and visual entertainment which can bring pleasure and information to people of all ages everywhere in the world.

Animation is different from other parts. Its language is the language of caricature. Our most difficult job was to develop the cartoon’s unnatural but seemingly natural anatomy for humans and animals.

“Love is putting someone else’s needs before yours.”

Walt Disney Quotes about Childhood
Childishness. I Think it is the equivalent of never losing your Sense of humor.

Walt Disney Movies Quotes
“Love is an open door … with you!”

Life Quotes by Walt Disney
When you believe in a thing, believe in it all the way, implicitly and unquestionable.

I have been up against tough competition all my life. I wouldn’t know how to get along without it.

Walt Disney Quotes about Adults
You’re dead if you aim only for kids. Adults are only kids grown up, anyway.

Why do we have to grow up? I know more adults who have the children’s approach to life. They’re people who don’t give a hang what the Joneses do. You see them at Disneyland every time you go there. They are not afraid to be delighted with simple pleasures, and they have a degree of contentment with what life has brought – sometimes it isn’t much, either.

Walt Disney Quotes on Goals
I do not like to repeat successes, I like to go on to other things.

Of all the things I’ve done, the most vital is coordinating those who work with me and aiming their efforts at a certain goal.

A person should set his goals as early as he can and devote all his energy and talent to getting there.

Walt Disney Quotes it all started with a Mouse
I only hope that we don’t lose sight of one thing – that it was all started by a mouse.

Walt Disney Quotes on Family
The important thing is the family. If you can keep the family together – and that’s the backbone of our whole business, catering to families – that’s what we hope to do.

A man should never neglect his family for business.

We believed in our idea – a family park where parents and children could have fun- together.

Walt Disney Quotes about Disney Studios
“We allow no geniuses around our Studio.”

“We are not trying to entertain the critics. I’ll take my chances with the public.”

Inspirational Quote by Walt Disney
You reach a point where you don’t work for money.

All our dreams can come true, if we have the courage to pursue them

Walt Disney Quotes on Hard Work
A person should set his goals as early as he can and devote all his energy and talent to getting there.

I have never been interested in personal gain or profit. This business and this studio have been my entire life.

Walt Disney Quotes for Business
Why worry? If you’ve done the very best you can, worrying won’t make it any better

Way of Life Quotes by Walt Disney
“I don’t like formal gardens. I like wild nature. It’s just the wilderness instinct in me, I guess.”

“I would rather entertain and hope that people learned something than educate people and hope they were entertained.”

Motivational Quotes by Walt Disney
The flower that blooms in adversity is the rarest and most beautiful of all.

The way to get started is to quit talking and begin doing.

Walt Disney Quotes about Dreams
Disneyland is a work of love…Drawing up plans and dreaming of what I could do, everything. It was just something I kind of kept playing around with.