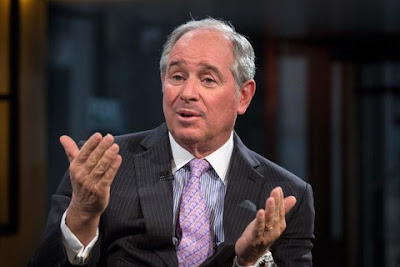 
I love picking people. I started Blackstone, and we had no people, and now we have with our portfolio companies about 750,000 people all over the world. Everybody who is at a senior level has ultimately been picked by me.

Markets tend to always overshoot when they get really ebullient.

Most people want to have ownership of their own growth. As a CEO, your job is to figure out how to make that possible.

How many times can you be told you are a loser? Apparently infinite.

It’s wonderful to learn about new cultures and to be able to travel easily to so many countries.

I’m not feeling undertaxed. Tax reform is an important issue. You have to have an inherent sense of fairness.

As CEO, you have to articulate the core values of your business. Everybody has to know what you stand for.

You won’t do well unless you’re hiring people who are consistent with your values.

To the extent that I can add value and make my country a better place, that’s a good thing to do.

I’m concerned with China growing at double or triple the rate of the West, that there will be tensions. One needs to do something to start addressing misunderstandings and frustration. My biggest job really is to figure other people out. I need to understand what makes a person tick.

Down cycles are not fun. But they form the basis for enormous future profitability.

We encourage people to come forward with different points of view actually, we demand it.

If you want to create a supportive work environment, don’t praise everyone, build a culture around and comfortability with criticism.

CEOs have to surround themselves with phenomenal people who share their value system.

If I get angry, it’s obvious. I don’t have to say much. “You have to have great fantasies in life and then fulfill them.

I don’t feel like a wealthy person. Other people think of me as a wealthy person, but I don’t. I feel the same as when I was a fifth-year associate trying to make partner at Lehman Brothers. I haven’t changed.

For future geopolitical stability and global prosperity, we need to build a culture of greater trust and understanding between China, America and the rest of the world.

A leader gives employees autonomy and control so they can make use of their gifts.

Sleeping at night is not a specialty of entrepreneurs. The entrepreneur who is sleeping soundly, something bad is happening to that person; they just don’t know it’s happening yet.

No one was born a CEO, it’s not a gene. It’s a trained behavior. There is a whole skillset.

The most important thing with a new business is figuring out why people need you.

My advice for entrepreneurs: Have thick skin and friends in the psychology department.

I don’t know how to interview anybody. You start a conversation. You try to figure out how flexible their minds are.

Keep in mind that outside of Stanford and Silicon Valley, people don’t actually like change.

My personal taxes are 53% of my taxable income. That’s 36% on the federal level and 17% for state and local.

Famous Quotes by Stephen A. Schwarzman

Entrepreneurs need the ability to take rejection. Believe in your basic plan, but be adaptable and keep going.

I’m pretty good on my feet. I’m pretty decent at bobbing and weaving, but there’s only so long you can bob and weave when you don’t have a good base.