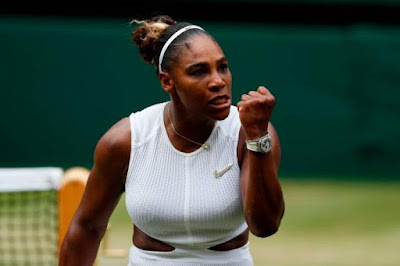 I’m not used to crying. It’s a little difficult. All my life I’ve had to fight. It’s just another fight I’m going to have to learn how to win, that’s all. I’m just going to have to keep smiling.

I am lucky that whatever fear I have inside me, my desire to win is always stronger.

I meet people who say, “Girl, I watch every match, and I pray for you.” I feel that energy and those prayers. Sometimes when I’m down on the court, in the back of my mind, I’m thinking, “They want me to win. Is there anything else I can give?” It encourages me to do better, to fight harder.

I feel like I don’t have to win anymore. I’ve had a wonderful career. Tennis has given me so much; things I would have never expected in my life. I feel honored to even be a part of such a wonderful sport.

People see me on the court only as a superhero, grunting and winning. They think you’re a robot, and I’m not.

I don’t like to lose-at anything… Yet I’ve grown most not from victories, but setbacks. If winning is God’s reward, then losing is how he teaches us.

For the younger sisters, we always look up to the older sisters because they’re always ahead of us and they always win.

Family’s first, and that’s what matters most. We realize that our love goes deeper than the tennis game.

I never close my mind to anything and eventually want to branch out. But for now, tennis is still number one for me.

I feel like I don’t have to win anymore. I’ve had a wonderful career. Tennis has given me so much; things I would have never expected in my life. I feel honoured to even be a part of such a wonderful sport.

My coach has said to me, “When you win a match or a tournament, you don’t even think about it – the very next minute you’re like.

We do more ready-to-wear and ath-leisure, things you would wear everyday. I never close my mind to anything and eventually want to branch out. But for now, tennis is still number one for me.

If you can keep playing tennis when somebody is shooting a gun down the street, that’s concentration.

I can’t become satisfied, because if I get satisfied, I’ll be like, “Oh, I’ve won Wimbledon, I’ve won the U.S. Open. Now can I relax.” But now people are really going to be fighting to beat me.

Sure, I’ve been on the Tube…I caught it to Eastbourne once.

I really hope that I can be helpful in that journey because I do believe that women deserve the same pay. We work just as hard as men do. I’ve been working, playing tennis, since I was three years old. And to be paid less just because of my sex – it doesn’t seem fair.

I don’t want to end my career and then start something, I like to do something while my career is still hot and I’ve always enjoyed designing. There’s plenty of time after my tennis to definitely go full-time fashion, when I have arthritis and all that fun stuff.

I’m a perfectionist. I’m pretty much insatiable. I feel there’s so many things I can improve on.

Will I have to explain to my daughter that her brother is gonna make more money doing the exact same job because he’s a man? If they both played sports since they were three years old, they both worked just as hard, but because he’s a boy, they’re gonna give him more money? Like, how am I gonna explain that to her? In tennis we’ve had great pioneers that paved the way – including Venus [Williams], who fought so hard for Wimbledon to pay women the same prize money they pay men, and Billie Jean King, who is one of the main reasons Title IX exists.

I’m a high-performance athlete: I’m running, I’m sprinting, I’m sliding, I’m doing pretty much everything and the last thing I want to worry about is my chest. I want to just worry about playing the sport at the highest level that I can.

Think of all the girls who could become top athletes but quit sports because they’re afraid of having too many defined muscles and being made fun of or called unattractive.

We’re in different categories. She [Venus Williams] does sports, I do more of the fashion side.

Serena Williams Quotes about Tennis
If I have a daughter and she plays tennis, and I have a son who plays tennis, I wouldn’t say that my son deserves more money because he’s a man. I would say they deserve the same amount of money.

I would be really excellent in a horror film because I have a great scream. I’d be really good in a comedy too. I’m top, top, top quality.

Those who say that Serena isn’t serious about tennis; she wants to go Hollywood. That’s true, about Hollywood. I would love to get a lot of acting gigs. But you wouldn’t believe the stuff I’ve turned down because of my tournament schedule…I would do well beside (comedian) Chris Tucker.

I am here to play women’s tennis. I’m a lady. Predominantly, most of the time I always like to play ladies.

Serena Williams Quotes on Life
I’ve always been a fighter and I’ve always fought through things my whole life.

I think in life you should work on yourself until the day you die.

Serena Williams Quotes about Attitude
I don’t have anything to prove ever, ever in my life. If I have something to prove, what does that mean for everyone else? And I think everyone should have that attitude.

Serena Williams Quotes on Winning
You have to believe in yourself when no one else does.

I’m really exciting. I smile a lot, I win a lot, and I’m really sexy.

The success of every woman should be the inspiration to another. We should raise each other up. Make sure you’re very courageous: be strong, be extremely kind, and above all be humble.

You have to be fearless to have success.

Everyone’s dream can come true if you just stick to it and work hard.

Luck has nothing to do with it.

I just could never have imagined that I would be mentioned with Chris Evert or with Martina Navratilova, because I was just a kid with a dream and a racquet. Living in Compton, this never happened before.