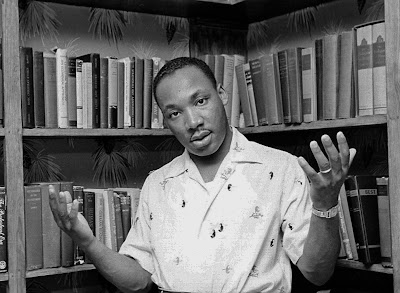 True peace is not merely the absence of tension: it is the presence of justice.

And so even though we face the difficulties of today and tomorrow, I still have a dream. It is a dream deeply rooted in the American dream.

I have a dream, one dream, keep dreaming. Dream of freedom, justice dreaming, dreaming of equality and hopefully no longer required to dream them

Peace is not merely a distant goal that we seek, but a means by which we arrive at that goal.

Let us not seek to satisfy our thirst for freedom by drinking from the cup of bitterness and hatred.

We have guided missiles and misguided men.

Nonviolence is a powerful and just weapon. which cuts without wounding and ennobles the man who wields it. It is a sword that heals.

The greatest purveyor of violence in the world: My own Government, I can not be Silent.

We can dream of an America, and a world, in which love and not money are civilization’s bottom line.

Man must evolve for all human conflict a method which rejects revenge, aggression and retaliation. The foundation of such a method is love.

My study of Gandhi convinced me that true pacifism is not nonresistance to evil, but nonviolent resistance to evil. Between the two positions, there is a world of difference. Gandhi resisted evil with as much vigor and power as the violent resister, but True pacifism is not unrealistic submission to evil power. It is rather a courageous confrontation of evil by the power of love.

Look to a day when people will not be judged by the color of their skin.

The group consisting of mother, father and child is the main educational agency of mankind.

We still have a choice today: nonviolence coexistence or violent coannihilation.

I have a dream, that one day on the red hills of Georgia…

Intelligence plus character-that is the goal of true education.

It’s not burn baby burn, but learn, baby, learn, so that you can earn, baby, earn.

Knowledge is a process of piling up facts; wisdom lies in their simplification.

Our lives begin to end the day we become silent about things that matter.

We must accept finite disappointment, but never lose infinite hope.

Be The Peace You Wish To See In The World!

I have a dream that my four little children will one day live in a nation where they will not be judged by the color of their skin, but by the content of their character.

I say to you today, my friends, that in spite of the difficulties and frustrations of the moment, I still have a dream.

Never succumb to the temptation of bitterness.

I decide on the basis of conscience. A genuine leader doesn’t reflect consensus, he molds consensus.

“The final thing I would like to say to you is that the world doesn’t like people like Gandhi.  That’s strange, isn’t it? They don’t like people like Christ, they don’t like people like Abraham Lincoln…One afternoon he walked to his evening prayer meeting.  Every evening he had a prayer meeting where hundreds of people came.  And he prayed with them.  And on his way out that afternoon, one of his fellows Hindus shot him.  And here was a man of nonviolence falling at the hands of man of violence.  Here was a man of love falling at the hands of a man of hate.  This seems the way of history.  And isn’t it significant that he died on the same day that Christ died.  It was on a Friday.  And this is the story of history.  But thank God, it never stopped there.  Thank God Friday is never the end.  The man who shot Gandhi only shot him into the hearts of humanity.”

“In the summer of 1956 the name of Mahatma Gandhi was well-known in Montgomery.  People who had never heard of the little brown saint of India were now saying his name with an air of familiarity.  Nonviolent resistance had emerged as the technique of the movement, while love stood as the regulating ideal.  In other words, Christ furnished the spirit and the motivation while Gandhi furnished the method.”

“As the days unfolded, the inspiration of Mahatma Gandhi began to exert its influence.  I had come to see early that the Christian doctrine of love operating through the Gandhian method of nonviolence was one of the most potent weapons available to the Negro in his struggle for freedom.”

I have decided to stick with love. Hate is too great a burden to bear.

Love is the only force capable of transforming an enemy into friend.

I firmly believe that the Gandhian philosophy of nonviolent resistance is the only logical and moral approach to the solution of the race problem in the United States.

The sweltering summer of the Negro’s legitimate discontent will not pass until there is an invigorating autumn of freedom and equality.

Black Power alone is no more insurance against social injustice than white power.

Without hard work, time itself becomes an ally of the primitive forces of social stagnation. So we must help time and realize that the time is always ripe to do right.

I cannot forget that the Nobel Prize for Peace was also a commission – a commission to work harder than I had ever worked before for “the brotherhood of man”.

Human salvation lies in the hands of the creatively maladjusted.

Unconditional love will have the final word in reality.

We must shift the arms race into a ‘peace race’.

We must concentrate not merely on the negative expulsion of war but the positive affirmation of peace.

The good neighbor looks beyond the external accidents and discerns those inner qualities that make all men human and, therefore, brothers.

We will not be satisfied until justice rolls down like waters.

If you lose hope, somehow you lose the vitality that keeps moving, you lose that courage to be, that quality that helps you go on in spite of it all. And so today I still have a dream.

Courage is the power of the mind to overcome fear.

We must build dikes of courage to hold back the flood of fear.

Nonviolence is not sterile passivity, but a powerful moral force which makes for social transformation.

It is purposeless to tell Negroes they should not be enraged when they should be. Indeed, they will be mentally healthier if they do not suppress rage, but vent it constructively and use its energy peacefully but forcefully to cripple the operations of an oppressive society. Civil disobedience can utilize the militance wasted in riots to seize clothes or groceries many do not even want.

Of course, there is nothing new about this kind of civil disobedience. It was seen sublimely in the refusal of Shadrach, Meshach and Abednego to obey the laws of Nebuchadnezzar because a higher moral law was involved. It was practiced superbly by the early Christians who were willing to face hungry lions and the excruciating pain of chopping blocks, before submitting to certain unjust laws of the Roman empire.

Mass civil disobedience can use rage as a constructive and creative force.

Forgiveness is not an occasional act, it is a constant attitude.

One who condones evils is just as guilty as the one who perpetrates it.

Whatever affects one directly affects all indirectly.