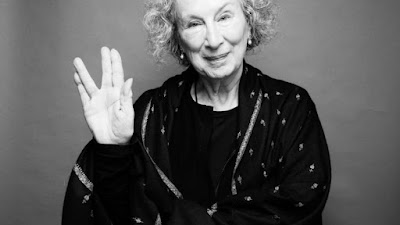 
Time has not stood still. It has washed over me, washed me away as if I’m nothing more than a woman of sand, left by a careless child too near the water.

Every ending is arbitrary because the end is where you write The end. A period, a dot of punctuation, a point of stasis. A pinprick in the paper: you could put your eye to it and see-through, to the other side, to the beginning of something else. Or, as Tony says to her students, Time is not solid, like wood, but a fluid, like water or the wind. It doesn’t come neatly cut into even-sized length, into decades and centuries. Nevertheless, for our purposes, we have to pretend it does. The end of any history is a lie in which we all agree to conspire.

Water does not resist. Water flows. When you plunge your hand into it, all you feel is a caress. Water is not a solid wall, it will not stop you. But water always goes where it wants to go, and nothing, in the end, can stand against it. Water is patient. Dripping water wears away a stone. Remember that, my child. Remember you are half water. If you can’t go through an obstacle, go around it. Water does.

A hot wind was blowing around my head, the strands of my hair lifting and swirling in it, like ink spilled in water.

In his student days, he used to argue that if a woman has no other course open to her but starvation, prostitution, or throwing herself from a bridge, then surely the prostitute, who has shown the most tenacious instinct for self-preservation, should be considered stronger and saner than her frailer and no longer living sisters. One couldn’t have it both ways, he’d pointed out: if women are seduced and abandoned they’re supposed to go mad, but if they survive, and seduce in their turn, then they were mad to begin with.

Well. Then we had the irises, rising beautiful and cool on their tall stalks, like blown glass, like pastel water momentarily frozen in a splash, light blue, light mauve, and the darker ones, velvet and purple, black cat’s ears in the sun, indigo shadow, and the bleeding hearts, so female in shape it was a surprise they’d not long since been rooted out. There is something subversive about this garden of Serena’s, a sense of buried things bursting upwards, wordlessly, into the light, as if to point, to say: Whatever is silenced will clamor to be heard, though silently.

The astrologers would tell that the U.S. is ruled by fire and Canada is ruled by water. Short version: You pep us up, we cool you down.

Reading and writing, like everything else, improve with practice. And, of course, if there are no young readers and writers, there will shortly be no older ones. Literacy will be dead, and democracy – which many belief goes hand in hand with it – will be dead as well.

Reading … changes you. You aren’t the same person after you’ve read a particular book as you were before, and you will read the next book, unless both are Harlequin Romances, in a slightly different way.

Communications technology changes possibilities for communication, but that doesn’t mean it changes the inherited structure of the brain. So you may think that you’re addicted to online reading, but as soon as it isn’t available anymore, your brain will pretty immediately adjust to other forms of reading. It’s a habit like all habits.

I read for pleasure and that is the moment I learn the most.

When you are in the middle of a story it isn’t a story at all, but only a confusion; a dark roaring, a blindness, a wreckage of shattered glass and splintered wood; like a house in a whirlwind, or else a boat crushed by the icebergs or swept over the rapids, and all aboard powerless to stop it. It’s only afterward that it becomes anything like a story at all. When you are telling it, to yourself or to someone else.