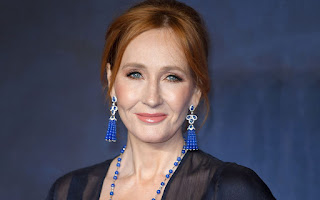 “My favorite literary heroine is Jo March. It is hard to overstate what she meant to a small, plain girl called Jo, who had a hot temper and a burning ambition to be a writer.”

“I just write what I wanted to write. I write what amuses me. It’s totally for myself. I never in my wildest dreams expected this popularity.”

“Sometimes the ideas just come to me. Other times I have to sweat and almost bleed to make ideas come. It’s a mysterious process, but I hope I never find out exactly how it works. I like a mystery, as you may have noticed.”

“I didn’t write with a target audience in mind. What excited me was how much I would enjoy writing about Harry. I never thought about writing for children―children’s books chose me. I think if it is a good book anyone will read it.”

I think writing about the time in Hermione’s life that I write about – growing from childhood into womanhood, literally, I think it brought back to me how very difficult it is. So much is expected of you as you become a woman, and often you are asked to sacrifice parts of you in becoming a girl, I would say. Hermione doesn’t.

If you are writing children’s books, you need to be a ruthless killer.

Books can be misleading

The presence of hundreds of books had finally convinced Hermione that what they were doing was right.

I don’t read ‘chick-lit,’ fantasy or science fiction but I’ll give any book a chance if it’s lying there and I’ve got half an hour to kill.

How in the name of Merlin’s pants have you managed to get your hands on those Horcrux books?

I think the Harry books are actually very moral, but some people just object to witchcraft being mentioned in a children’s book.

Magic has universal appeal. I don’t believe in magic in the way that I describe in my books, but I’d love it to be real.

I expect what you’re not aware of would fill several books, Dursely.

Madam Pince, our librarian, tells me that it is ‘pawed about, dribbled on, and generally maltreated’ nearly every day – a high compliment for any book.

I think it’s the books that you read when you’re young that live with you forever.

I didn’t write with a target audience in mind. What excited me was how much I would enjoy writing about Harry. I never thought about writing for children – children’s books chose me. I think if it is a good book anyone will read it.

One can never have enough socks,” said Dumbledore. “Another Christmas has come and gone and I didn’t get a single pair. People will insist on giving me books.

Books are like mirrors: if a fool looks in, you cannot expect a genius to the lookout.

Some people do not seem to grasp that I still have to sit down in peace and write the books, apparently believing that they pop up like mushrooms without my connivance.

Warlock D. J. Prod of Didsbury says: “My wife used to sneer at my feeble charms, but one month into your fabulous Kwikspell course and I succeeded in turning her into a yak! Thank you, Kwikspell!

He tried to give his wife pleasure in little ways, because he had come to realize, after nearly two decades together, how often he disappointed her in the big things. It was never intentional. They simply had very different notions of what ought to take up most space in life.

Life, for Colin, was one long brace against pain and disappointment, and everybody apart from his wife was an enemy until proven otherwise.

Mr. Weasley was unavailable for comment, although his wife told reporters to clear off or she’d set the family ghoul on them.

Youth cannot know how age thinks and feels. But old men are guilty if they forget what it was to be young.

Wit beyond measure is a man’s greatest treasure.

Dumbledore will only leave from Hogwarts when there are none loyal to him!

The best of us must sometimes eat our words

The trouble is, the other side can do magic too, Prime Minister.

In magic, man has to rely on himself. So, in religion, of course, you’re looking for outside support but that’s the appeal of magic.

Whether you come back by page or by the big screen,

Hogwarts will always be there to welcome you home.

There is a fringe of nationalists who like to demonise anyone who is not blindly and unquestionably pro-independence. I suspect, notwithstanding the fact that I’ve lived in Scotland for 21 years and plan to remain here for the rest of my life, that they might judge me ‘insufficiently Scottish’ to have a valid view.

Read as much as you possibly can. Nothing will help you as much as reading.

Read as much as you possibly can. Nothing will help you as much as reading and you’ll go through a phase where you will imitate your favorite writers and that’s fine because that’s a learning experience too.

If it’s a good book, anyone will read it. I’m totally unashamed about still reading things I loved in my childhood.

It was on the corner of the street that he noticed the first sign of something peculiar – a cat reading a map.

I just write what I wanted to write. I write what amuses me. It’s totally for myself. I never in my wildest dreams expected this popularity.

For in dreams we enter a world that is entirely our own. Let them swim in the deepest ocean or glide over the highest cloud.

In dreams, we enter a world that’s entirely our own.

go through in life and become friends, and knocking out a twelve-foot mountain troll is one of them.

But from that moment on, Hermione Granger became their friend. Because there are somethings you can’t

There are always loose ends in real life.

The stories we love best do live in us forever.

As is a tale, so is life: not how long it is, but how good it is, is what matters. I wish you all very good lives.

The words had escaped him before he knew what he was saying.”

“There’s no need to call me “sir” Professor.”

Do not pity the dead, Harry.

Taunting Death … means pitting oneself against a wily enemy who cannot lose.

Do not pity the dead, Harry. Pity the living, and, above all those who live without love.

When you have seen as much of life as I have, you will not underestimate the power of obsessive love.

I gave my hero a talent I’d love to have. Who wouldn’t want to fly?

You’re the one who is weak. You will never know love or friendship. And I feel sorry for you.

It is our choices… that show what we truly are, far more than our abilities.

To have been loved so deeply, even though the person who loved us is gone, will give us some protection forever.

I was set free because my greatest fear had been realized, and I still had a daughter who I adored, and I had an old typewriter and a big idea. And so rock bottom became a solid foundation on which I rebuilt my life.

If you don’t like to read, you haven’t found the right book.

Wherever I am, if I’ve got a book with me, I have a place I can go and be happy

I don’t think about who the audience is for my books.

I would always want printed books.

Harry – you’re a great wizard, you know.” “I’m not as good as you,” said Harry, very embarrassed, as she let go of him. “Me!” said Hermione. “Books! And cleverness! There are more important things – friendship and bravery and – oh Harry – be careful!

I loved writing Dumbledore and he is the epitome of goodness.