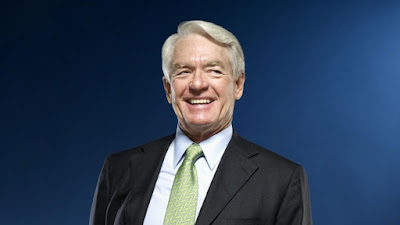 
There is nothing else that so kills the ambitions of a person as criticisms from superiors. I never criticize anyone. I believe in giving a person an incentive to work. So I am anxious to praise but loath to find fault. I have yet to find a person, however great or exalted his station, who did not do better work and put forth greater effort under a spirit of approval than he would ever do under a spirit of criticism.

The man who trims himself to suit everybody will soon whittle himself away.

Nobody wants to be passive; indexing is not passive – much more goes into indexing than watching a stock become the next buggy whip.

I quickly learned that if I kept at it and plowed right through the rejections I would eventually get somebody to buy my wares.

A man can succeed at almost anything for which he has unlimited enthusiasm.

We are all salesmen every day of our lives. We are selling our ideas, our plans, our enthusiasms to those with whom we come in contact.

I am like a chief. I like to taste the food. If it tastes bad, I don’t serve it. I’m constantly monitoring what we do, and I’m always looking for better ways we can provide financial services, ways that would make me happy if I were a client.

The best place to succeed is where you are with what you’ve got.

At the end of every day, having a clientele that speaks well of you, that’s the largest source of business. I don’t care what kind of business you’re in. Clients referring us to their friends or relatives is so much more powerful than any advertising we could ever do.

Most of the mutual fund investments I have are index funds, approximately 75%.

I couldn’t read. I just scraped by. My solution back then was to read classic comic books because I could figure them out from the context of the pictures. Now I listen to books on tape.

I quickly learned that if I kept at it and plowed right through the rejections I would eventually get somebody to buy my wares.

The man who has done less than his best has done nothing.

Many times I can see a solution to something differently and quicker than other people. I see the end zone and say ‘This is where I want to go.’

The man who does not work for the love of work but only for money is not likely to make money nor find much fun in life.

Passion is the great slayer of adversity. Focus on strengths and what you enjoy.

I did as much as I could: raising chickens, pushing an ice-cream cart, bagging walnuts, driving a tractor on a beet farm, working on the railroad. I think this eclectic career helped me a lot in life.

Don’t limit investing in the financial world. Invest something of yourself, and you will be richly rewarded.

It’s fun to play around… it’s human nature to try to select the right horse… But for the average person, I’m more of an indexer… The predictability is so high… For 10, 15, 20 years you’ll be in the 85th percentile of performance. Why would you screw it up?

Kindness is more powerful than compulsion.

The inventor, the man with a unique, specialized talent, is the only real super-genius. But he is so rare that he needs no consideration.

I consider my ability to arouse enthusiasm among men the greatest asset I possess. The way to develop the best that is in a man is by appreciation and encouragement.

The man who fails to give fair service during the hours for which he is paid is dishonest. The man who is not willing to give more than this is foolish.

The men who miss success have two general alibis: ‘I’m not a genius’ is one; and the other, ‘There aren’t the opportunities today there used to be’.

The man who has done less than his best has done nothing.

I have always felt that the surest way to qualify for the job just ahead is to work a little harder than anyone else on the job one is holding down.

Nothing is more fatal to success than taking one’s job as a matter of course.

I thought and dreamed of nothing else but the steelworks.

The man who has done his best has done everything.

Keeping a little ahead of conditions is one of the secrets of business, the trailer seldom goes far.

Spending creates more wealth for everybody.

The word passive does a disservice to investors considering their options. Indexing provides an effective means of owning the market and allows investors to participate in the returns of a basket of stocks. The basket of stocks changes over time as stocks are added or removed based on its rules.

The nasty little secret was that I couldn’t read worth a darn. In my case, I still read very slowly to this moment.

There is nothing else that so kills the ambitions of a person as criticisms from superiors. I never criticize anyone…If I like anything, I am hearty in my approbation and lavish in my praise.

The hardest struggle of all is to be something different from what the average man is.

It may be in seemingly unimportant things that a man expresses his passion for perfection, yet they will count heavily in the long run.

Don’t be afraid of imperiling your health by giving a few extra hours to the company that pays your salary!

People succeed at just about anything they’re genuinely enthusiastic about.

The way to get things done is to stimulate competition. I do not mean in a sordid, money-getting way, but in the desire to excel.