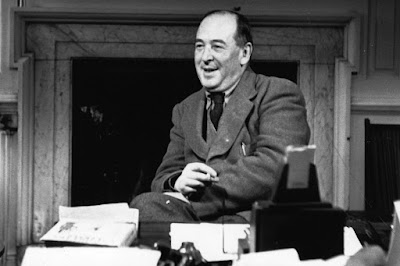 The great thing to remember is that though our feelings come and go to God’s love for us does not.

Children have one kind of silliness, as you know, and grown-ups have another kind.

You can make anything by writing.

There are two kinds of people: those who say to God, ‘Thy will be done,’ and those to whom God says, ‘All right, then, have it your way.’

I have come home at last! This is my real country! I belong here. This is the land I have been looking for all my life, though I never knew it till now…Come further up, come further in!

Write about what really interests you, whether it is real things or imaginary things, and nothing else.

To enter heaven is to become more human than you ever succeeded in being on earth; to enter hell is to be banished from humanity. What is cast (or casts itself) into hell is not a man: it is ‘remains.’

God descends to re-ascend. He comes down; down from the heights of absolute being into time and space, down into humanity … down to the very roots and sea-bed of nature He has created. But He goes down to come up again and bring the ruined world up with Him.

If you look for truth, you may find comfort in the end; if you look for comfort you will not get either comfort or truth only soft soap and wishful thinking to begin, and in the end, despair.

Even in literature and art, no man who bothers about originality will ever be original: whereas if you simply try to tell the truth (without caring twopence how often it has been told before) you will, nine times out of ten, become original without ever having noticed it.

The present is the only time in which any duty may be done or grace received.

Humans are amphibians – half spirit and half animal. As spirits, they belong to the eternal world, but as animals they inhabit time.

You Too? I thought I was the only one.

The very nature of Joy makes nonsense of our common distinction between having and wanting.

No soul that seriously and constantly desires joy will ever miss it. Those who seek to find. To those who knock it is opened.

I hope no one who reads this book has been quite as miserable as Susan and Lucy were that night; but if you have been – if you’ve been up all night and cried till you have no more tears left in you – you will know that there comes, in the end, a sort of quietness. You feel as if nothing is ever going to happen again.

I can’t imagine a man really enjoying a book and reading it only once.

Nature never taught me that there exists a God of glory and of infinite majesty. I had to learn that in other ways. But nature gave the word glory a meaning for me. I still do not know where else I could have found one.

God is no fonder of intellectual slackers than He is of any other slacker.

If I find in myself desires which nothing in this world can satisfy, the only logical explanation is that I was made for another world.

It is too good to waste on jokes.

But courage, child: we are all between the paws of the true Aslan.

Most of us, I suppose, have a secret country but for most of us it is only an imaginary country. Edmund and Lucy were luckier than other people in that respect.

Remember that all worlds draw to an end and that noble death is a treasure which no one is too poor to buy.

There are a dozen views about everything until you know the answer. Then there’s never more than one.

It matters enormously if I alienate anyone from the truth.

A man can no more diminish God’s glory by refusing to worship Him than a lunatic can put out the sun by scribbling the word, ‘darkness’ on the walls of his cell.

Nothing is yet in its true form.

Some day you will be old enough to start reading fairy tales again.

It’s all love or sex these days. Friendship is almost as quaint and outdated a notion as chastity. Soon friends will be like the elves and the pixies – fabulous mythical creatures from a distant past.

A myth is a lie that conveys the truth.

Nothing you have not given away will ever really be yours.

If you read history you will find that the Christians who did most for the present world were precisely those who thought most of the next. It is since Christians have largely ceased to think of the other world that they have become so ineffective in this.

No philosophical theory which I have yet come across is a radical improvement on the words of Genesis, that ‘In the beginning, God made Heaven and Earth’.

Affection is responsible for nine-tenths of whatever solid and durable happiness there is in our lives.

I am often, I believe, praying for others when I should be doing things for them. It’s so much easier to pray for a bore than to go and see him.

We must lay before him what is in us; not what ought to be in us.

Life is too deep for words, so don’t try to describe it, just live it.

Never, never pin your whole faith on any human being: not if he is the best and wisest in the whole world. There are lots of nice things you can do with sand; but do not try building a house on it.

Imagine yourself as a living house.

I have learned now that while those who speak about one’s miseries usually hurt, those who keep silence hurt more.

To love is to be vulnerable.