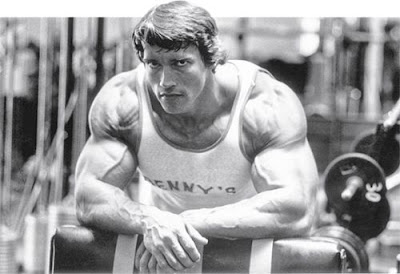 
I have inhaled, exhaled everything.

That was another thing I will never forgive the Republican Party for.

Having a pump is like having sex. I train two, sometimes three times a day. Each time I get a pump. It’s great. I feel like I’m coming all day.

if they don’t have the guts, I call them girlie men. –Arnold Schwarzenegger describing Democratic lawmakers in California

If I would do another ‘Terminator’ movie I would have Terminator travel back in time and tell Arnold not to have a special election. -Arnold Schwarzenegger after all four of his ballot initiatives were roundly defeated in the special election he called

It’s the most difficult [decision] I’ve made in my entire life, except the one I made in 1978 when I decided to get a bikini wax. –Arnold Schwarzenegger announced his gubernatorial candidacy on “The Tonight Show With Jay Leno

As much as when you see a blonde with great tits and a great ass, you say to yourself, ‘Hey, she must be stupid or must have nothing else to offer,’ which maybe is the case many times. But then again there is the one that is as smart as her breasts look, great as her face looks, beautiful as her whole body looks gorgeous, you know, so people are shocked.

I was ashamed to call myself a Republican during that period.

The c**k isn’t a muscle so it doesn’t grow in relation to the shoulders, say, or the pectorals. You can’t make it bigger through exercise, that’s for sure.

My friends don’t want me to mention Kurt’s name, because of all the recent Nazi stuff and the U.N. controversy, but I love him and Maria does too, and so thank you, Kurt. –on his friend and fellow Austrian Kurt Waldheim, a Nazi war criminal

I saw this toilet bowl. How many times do you get away with this — to take a woman, grab her upside down, and bury her face in a toilet bowl? I wanted to have something floating there … The thing is, you can do it, because, in the end, I didn’t do it to a woman — she’s a machine! We could get away with it without being crucified by the who-knows-what group. -Arnold Schwarzenegger, describing a scene in “Terminator 3

If you can go through the pain period, you make it be a champion. If you can’t go through it, forget it. And that’s what most people lack: having the guts – the guts to go in and just say… “I don’t care what happens

“All of a sudden, we see riots, we see protests, we see people clashing. The next thing we know, there is injured or there are dead people. We don’t want to get to that extent. –Arnold Schwarzenegger on the dangers posed by gay marriage

Born to be bad.

The unique thing about bodybuilding is that when I compete it is just me on a stage alone. There is no field, no bat, no ball, no skis, and on skates. All other athletes have to use the equipment, like football. But I don’t use anything in competition except myself. It’s just me up there. Me alone. No coach. No nothing.

My nipples are very sensitive.

I need your clothes your boots and your motorcycle.

What killed the Dinosaurs? The Ice Age!

I didn’t leave bodybuilding until I felt that I had gone as far as I could go. It will be the same with my film career. When I feel the time is right, I will then consider public service. I feel that the highest honor comes from serving people and your country.

Talk to the hand.

The better you get, the less you run around showing off as a muscle guy. You know, you wear regular shirts-not always trying to show off what you have. You talk less about it. It’s like you have a little BMW – you want to race the hell out of this car, because you know it’s just going 110. But if you see guys driving a Ferrari or a Lamborghini, they slide around at 60 on the freeway because they know if they press on that accelerator they are going to go 170. These things are the same in every field.

If it bleeds, we can kill it.

The mind is incredible. Once you’ve gained mastery over it, channeling its powers positively for your purposes, you can do anything. I mean anything. The secret is to make your mind work for you not against you. This means constantly being positive. Constantly setting up challenges you can meet either today, next week, or next month. “I can’t… should be permanently stricken from your vocabulary, especially the vocabulary of your thoughts. You must see yourself always growing and improving.

Dylan you son of a b*tch

You set us up!

“With my desire and drive, I definitely wasn’t normal. Normal people can be happy with a regular life. I was different. I felt there was more to life than plodding through a normal existence… I have always been impressed by stories of greatness and power. I wanted to do something special, to be recognized as the best. I saw bodybuilding as the vehicle that would take me to the top, and I put all my energy into it. And so with beliefs and dreams like that, he reached the top and everything he has ever done. And it all started in his head… with visions, with dreams, would goals.

Allow me to break the ice.

Arnold Schwarzenegger Quotes Never Give Up

If I can see it and believe it, then I can achieve it.

Be hungry for success, hungry to make your mark, hungry to be seen and to be heard and to have an effect. And as you move up and become successful, make sure also to be hungry for helping others.

I was always dreaming about very powerful people. Dictators and things like that. I was just always impressed by people who could be remembered for hundreds of years Even like Jesus, being for thousands of years remembered.

I always felt like my place is America and when I was 10 years old…I only dreamed of coming to America and being the greatest.

You make too much noise! Has to be very quiet in here, like in a Church!

If you want to be a champion you cannot have any kind of an outside negative force coming in and affect you.

Your clothes, give them to me, now!– Terminator

Get to the choppa.”

Money doesn’t make you happy. I now have $50 million but I was just as happy when I had $48 million.

With my desire and drive, I definitely wasn’t normal. Normal people can be happy with a regular life. I was different. I felt there was more to life than plodding through a normal existence… I have always been impressed by stories of greatness and power. I wanted to do something special, to be recognized as the best. I saw bodybuilding as the vehicle that would take me to the top, and I put all my energy into it.And so with beliefs and dreams like that, he reached the top and everything he has ever done. And it all started in his head… with visions, with dreams, would goals.

We all have great inner power. The power is self-faith. There’s really an attitude to winning. You have to see yourself winning before you win. And you have to be hungry. You have to want to conquer.

For me life is continuously being hungry. The meaning of life is not simply to exist, to survive, but to move ahead, to go up, to achieve, to conquer.

We have to make sure everyone in California has a great job. A fantastic job!

As you know, I don’t need to take any money from anybody. I have plenty of money myself. I will make the decisions for the people.

I can promise you that when I go to Sacramento, I will pump up Sacramento.–Arnold Schwarzenegger on The Tonight Show

I think that gay marriage should be between a man and a woman.

Have you ever killed anyone? Yeah, but they were all bad.

Who is your daddy and what does he do?

I don’t know what the problem is, but I’m sure it can be solved without resorting to violence.

Strength does not come from winning. Your struggles develop your strengths. When you go through hardships and decide not to surrender, that is strength.

Bodybuilding is much like any other sport. To be successful, you must dedicate yourself 100% to your training, diet and mental approach.

It doesn’t really matter what party you come from. I think the people appreciate that and they know that you’re working together, that you can provide the kind of leadership to bring both of the parties together, and do the kind of things that need to be done for the state.

We have to show leadership in protecting our environment so that we have a future for our children and grandchildren.

One Liners Quotes by Arnold Schwarzenegger

See you at the party Richter!

You are not you, you are me.

Bring the toy back to the carpet.

Now listen to me very carefully.

The key to success? Work hard, stay focused and marry a Kennedy.

As long as I live, I will never forget that day 21 years ago when I raised my hand and took the oath of citizenship. Do you know how proud I was? I was so proud that I walked around with an American flag around my shoulders all day long.

When the people become involved in their government, government becomes more accountable, and our society is stronger, more compassionate, and better prepared for the challenges of the future.

The worst thing I can be is the same as everybody else. I hate that.

Bodybuilding is much like any other sport. To be successful, you must dedicate yourself 100% to your training, diet and mental approach.

To go in the direction that I went takes a lot of work. And I don’t think you can do the work – the five or six hours of working out a day – if you don’t have a clear goal or know why you’re doing it. If you just hang out at the gym and train for five or six hours a day without a goal is almost impossible.

People say, My God, you’re so disciplined. But it has nothing to do with discipline; I loved it. Because I knew that every time I went to the gym I was one step closer to winning the competition.